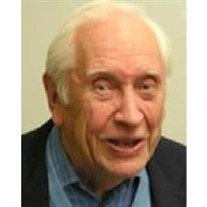 Please share a memory of Edward to include in a keepsake book for family and friends.
View Tribute Book
Mr. Edward W. Shineman, Jr. died on January 12, 2009 at New York Downtown Hospital of pulmonary failure. He was 93 years old. A lifelong Canajoharie resident, most recently at the Arkell Center, Mr. Shineman also maintained a home at the Hallmark Center for Senior Living in New York City. Born in his mother's bed at 122 Cliff Street on April 9, 1915, he was the son of Edward W. Shineman and Bertelle Shubert. Mr. Shineman attended Canajoharie High School, skated on Shaper's Pond and spent his boyhood summers at Camp Chenango on Otsego Lake and at Interlochen Music Camp in Michigan where he honed his skills on Bb cornet and performed under the baton of John Phillip Sousa. Accepted at Cornell University, Ed was active in Lambda Chi Alpha fraternity, played in the Big Red Marching Band, served as president of the University Orchestra and Musical Club and courted his future wife, Doris. Graduating with a degree in accounting in depression-era 1937, Ed earned a scarce place in GE's management training program. In 1946 he returned to Canajoharie to join Beech-Nut Packing Company, ultimately serving as comptroller, treasurer and in other officer-level roles as the firm evolved into Beech-Nut Life Savers and was merged into E.R. Squibb and Co. Transferring late in his career to New York City, he retired after 40 years of service at age 70 in 1985. Mr. Shineman was also active as an advisor and director for a number of emergent upstate concerns including the Central National Bank of Canajoharie, Fenimore Asset Management of Cobleskill, and Taconic Farms, a Hudson NY based breeder of laboratory animals. For many years he contributed his services as President of the Arkell Foundation, a Canajoharie-based senior citizen residence and philanthropy. The Foundation administration building is named in his honor. Long interested in Cornell affairs, Mr. Shineman has served as president of the class of '37 for the past 25 years, and in 2008 was awarded the Vanneman Outstanding Class Leader Award. A former Cornell Council member Mr. Shineman was long active in fund raising and, together with his wife Doris, was named a University Benefactor in 1997. Mr. Shineman's avocations included tennis, collecting early brass solos, and the mathematical recreation of magic squares where his constructs have appeared in The Journal of Recreational Mathematics, Recreational and Educational Computing and in Clifford A. Pickover's The Zen of Magic Squares, Circles, and Stars. His magic diamond methodology is protected by the U.S. Copyright Office. Mr. Shineman was a lifelong member of the Canajoharie Reformed Church, the Hamilton #79 Masonic Lodge of Canajoharie and the Fort Rensselaer Club. In New York City, he belonged to the Cornell Club and attended Marble Collegiate Church. Family and friends remember Ed's sense of humor, devotion to his family, scrupulous honesty, generosity toward worthy causes and remarkably even and non-judgmental temperament. Still earning a paycheck in a consulting role at age 93, he boasted that he was the only person alive who had continuously paid into Social Security from its beginning. Mr. Shineman is survived by his sons Tom and Alan, daughters-in-law Jan and Genny, grandchildren Carrie, Trynka, Weylon, Torrey, Diana and Doug, great-grandchildren Caleigh, Ava, Simon and Leila and brother Richard. His wife of 65 years, Doris, passed away in 2004.
To send flowers to the family or plant a tree in memory of Edward Shineman, please visit Tribute Store
Monday
19
January

Share Your Memory of
Edward
Upload Your Memory View All Memories
Be the first to upload a memory!
Share A Memory
Send Flowers
Plant a Tree