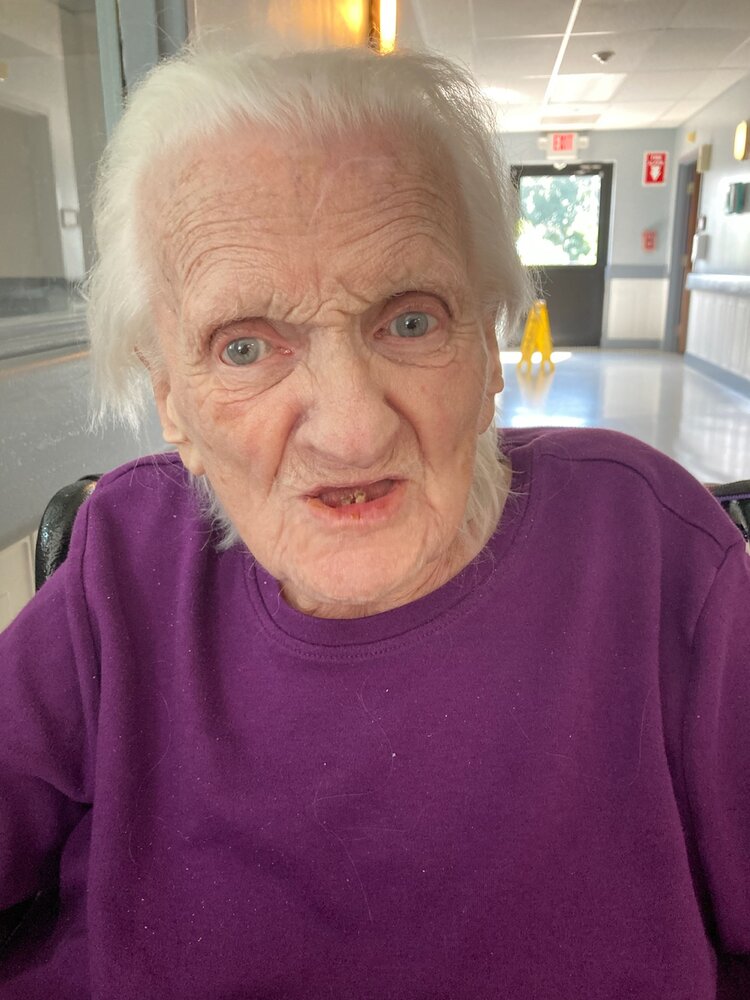 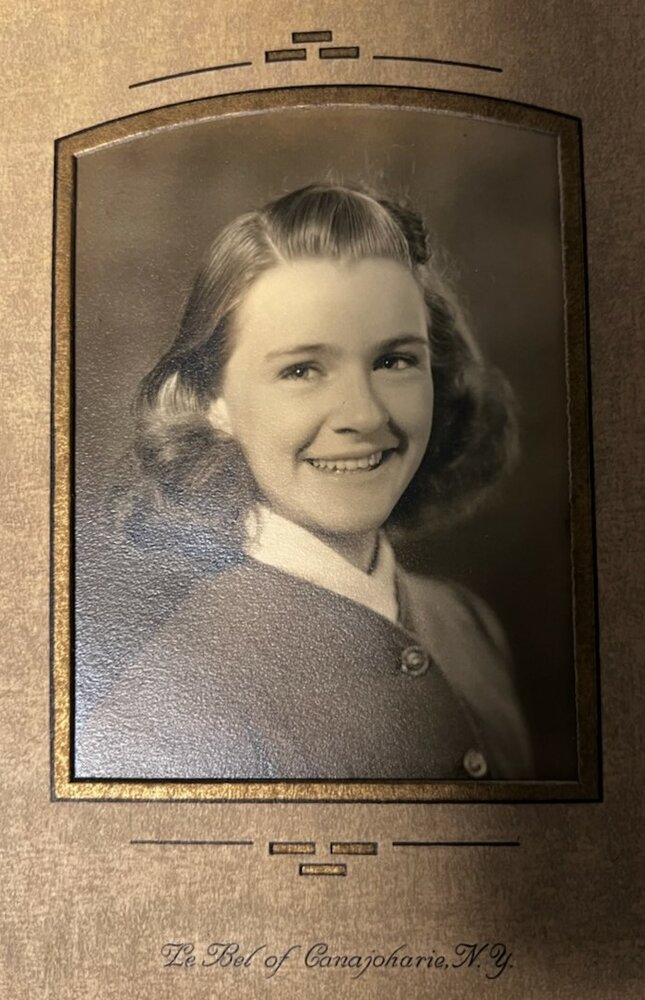 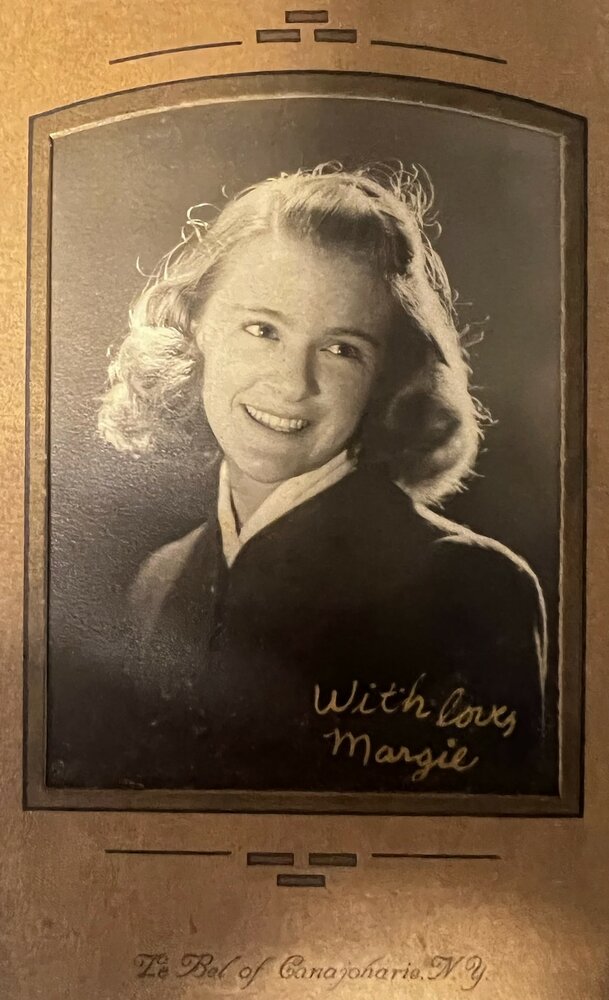 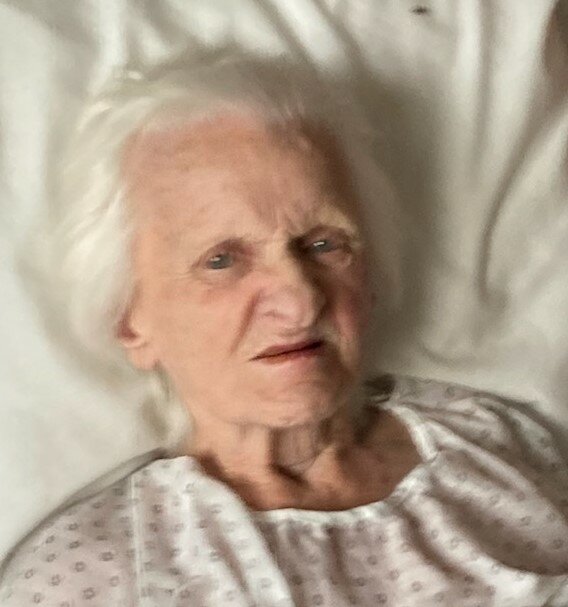 Please share a memory of Marjorie to include in a keepsake book for family and friends.
View Tribute Book

Mrs. Marjorie Gore Akers, (aka Marge or Midge), 97, of Otsego Street, Canajoharie, NY passed away on October 15th, 2022, having been a resident of the Palatine Nursing Home, Palatine Bridge, NY since July 2022. Born in Gloversville, NY on August 13, 1925, the daughter of John Gore and Gretchen Bragdon Gore. She was pre-deceased by her older brother, Richard Bragdon Gore, (aka Brother John Gore, St. Joseph's Abby, Spencer, Mass), and her husband John Churchman Akers, (of Canajoharie), whom she met in 1948 in Fort Lauderdale, Florida, where she worked as a waitress. A union that lasted just short of 55 years with passing. His cremated remains were scattered in the North Atlantic by the US Navy. Marge is survived by her two sons, John Michael Akers, 72, and James William Akers, 69, (of Canajoharie, NY) and several cousins. Before leaving Canajoharie to attend prep school she was involved with the Girl Scouts here locally, following her father’s footsteps, as he was involved in the Boy Scouts. She graduated from Stoneleigh Burnham School, (Greenfield, Mass), a preparatory boarding school, in June 1943, and was known for her cheerfulness and a peppy basketball style, as well as being talented in tap dancing, writing, and music. Midge graduated from Cazenovia College, (Cazenovia, NY), in May 1946, with an associate degree in liberal arts. She also attended Tufts University, (Medford, Mass), and Endicott College, (Beverly Mass), and took an aviation class during the summer session at SUNY Oneonta, (Oneonta, NY). Marjorie received a certificate in 1948 from Katherine Gibbs College, (Providence, RI), a top rated secretarial/business school and was trained in shorthand, touch typewriting, telephone etiquette, and administrative assistance. In the early 1940's she had worked as part of the home front effort for WWII, making K rations at Beech-Nut Nutrition, in Canajoharie, NY. In the 1960's she was recognized by Avon Products, Inc. for her success in selling their line of beauty products. Midge was well known for her activities in kayaking, sailing, bicycling, tobogganing, alpine skiing, swimming, canoeing, and backpacking in the Adirondacks, Mohawk Valley, and other areas of Upstate NY., promoting sailing, (Canada Lake, NY), she taught many persons how to sail in three classes of sailboats-Comet, Sunfish, and the O'Day Widgeon 12. She received many trophies from the Canada Lake Sailing Club.  Marjorie had a passion for the outdoors and was sought by others for her knowledge of Ornithology, Zoology, and Botany. She loved her family and enjoyed canning and cooking for them as well as for many friends. Marge was a member of the United Methodist Church of Canajoharie, NY, and later was a enthusiastic believer of Messianic Christianity and also was strongly interested in the Edgar Cayce Readings, Raymond Moody M.D.'s research on the afterlife, and other esoteric knowledge. Some of her last words included, referring to the employees of the Palatine Nursing Home, were " God Bless everyone for helping me." She faced death gracefully and peacefully, and her cremated remains will be placed at Canajoharie Falls Cemetery on Tuesday November 15th at 10:00AM. Marjorie is reunited with her relatives and friends in the spiritual world and is not forgotten in this world.

To send flowers to the family or plant a tree in memory of Marjorie Akers, please visit Tribute Store

A Memorial Tree was planted for Marjorie
We are deeply sorry for your loss ~ the staff at Houghtaling & Smith Funeral Home, Inc.
Join in honoring their life - plant a memorial tree
Online Memory & Photo Sharing Event
Online Event
About this Event

Look inside to read what others have shared
Family and friends are coming together online to create a special keepsake. Every memory left on the online obituary will be automatically included in this book.
View Tribute Book
Services for Marjorie Akers
There are no events scheduled. You can still show your support by sending flowers directly to the family, or planting a memorial tree in memory of Marjorie Akers.
Visit the Tribute Store

Share Your Memory of
Marjorie
Upload Your Memory View All Memories
Be the first to upload a memory!
Share A Memory
Send Flowers
Plant a Tree