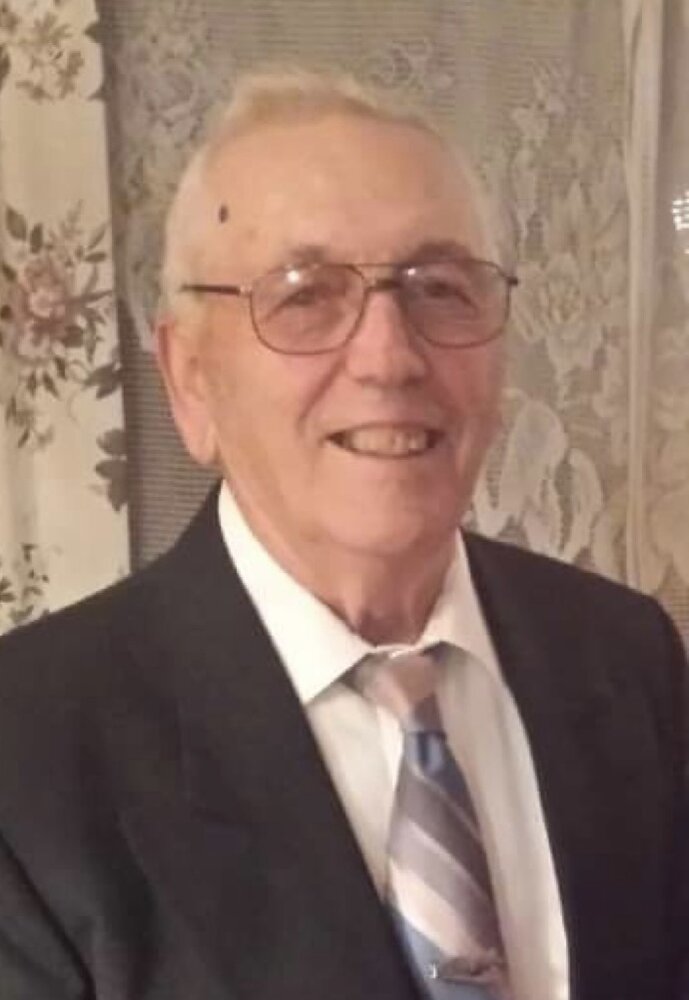 Please share a memory of Donald to include in a keepsake book for family and friends.
View Tribute Book
Mr. Donald G. Hisert, 89, of Eaker Road, Fort Plain, New York was released to be with our Lord in Heaven on Friday, December 24, 2021 with his family by his side. Born on May 4, 1932 in the Town of Minden, NY, Donald was the son of Benjamin Hisert and Irene Pitcher Hisert. He spent most of his life on or near the family farm as a resident of Fort Plain and about 4 years in Vero Beach, Florida. Donald was married to Audrey E. Whitehouse June 1, 1952 at East Stone Arabia Methodist Church. Donald attended grade school at the old school house in Nelliston until he went to the Fort Plain High School where he met Audrey on the school bus. Their courtship included attending church socials and family picnics. Donald and Audrey celebrated 69 years of marriage. As a young teenager, Donald began his working career hand loading and hauling over 100 loads of manure with a team of horses and a spreader for a farmer in Wagner’s Hollow earning 50 cents a load. From there, he worked odd farming or construction jobs using a bicycle for transportation. After marrying Audrey and starting a family, Donald built, owned, and operated Hisert’s Diesel Service and Repair near Ephratah, NY. When Audrey’s father, Earl L. Whitehouse, retired from farming, Donald purchased the family farm. He was a dairy farmer until a serious farm injury at 41 forced him to make a career change to aviation. He often stated, “The hardest thing I ever did was sell my cows and my airplane.” Donald furthered his education to become a Certified A&P Mechanic, and then a Licensed Aircraft Inspector (IA). He worked for Flight Safety International in Vero Beach, Florida, Richmor Aviation in Saratoga Springs, NY, and an Air Ambulance / Air Response Company in Fort Plain. He later founded Hisert’s Airpark, Inc. where he built and restored antique aircraft. Donald was a pilot for 50+ years, a member of Aircraft Owners and Pilots Association (AOPA) and a member of Pilot’s Club Adirondack Chapter 602. He held a valid pilot’s license for the rest of his life. He valued education and served on the local Board of Education at Fort Plain CSD and at HFM BOCES. In his tenacity to always learn and grow, he built and repaired anything he put his mind to; truly a Jack-of-all-Trades. The things Donald accomplished throughout his life are a true testament to his work ethic and character. “Anything worth having is worth working for.” Donald was a true patriarch and extremely proud of his family. Along with his wife Audrey and eldest son Paul, Donald founded The Hisert Family Park, Inc. in 1992 which became established as a non-profit organization in 1999. It was Donald’s wish to leave part of the family farm as a legacy to his children, their spouses, and descendants thereafter. Donald attended East Stone Arabia Methodist Church. His brothers, William Hisert, Robert Hisert; and sisters, Ethel Crouse, and Dorothy Shults predeceased him. Mr. Donald G. Hisert is survived by his wife, Audrey Hisert; 8 children, Paul Hisert and Betty, Roland Hisert, Glen Hisert and Marjorie, Mark Hisert and Laurie, Sheldon Hisert and Michelle, Michelle Searles and Susan, Linette Mancini and Frank, Lisa VanValkenburgh and Lewis; brother, Gerald Hisert and Nancy; 27 grandchildren, 44 great-grandchildren, 8 great-great-grandchildren, nieces, nephews, and cousins. The family will receive relatives and friends on Monday, December 27, 2021 from 6 to 8 PM at The Chapel of Houghtaling & Smith Funeral Home, Inc., 20 Otsego Street, Canajoharie, NY. The family request that anyone in attendance please wear a mask and practice social distancing.
To send flowers to the family or plant a tree in memory of Donald Hisert, please visit Tribute Store
Monday
27
December