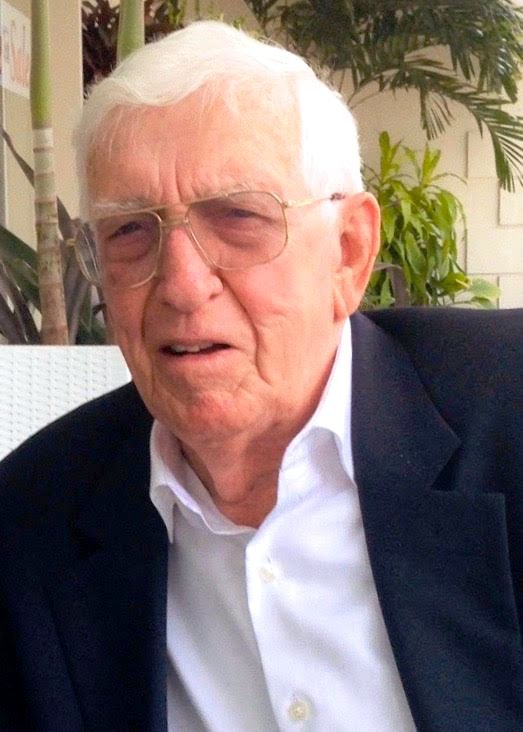 Mr. Richard J. Burgess, 91, of Naples, Florida, and Latimer Hill Road, Ames, NY, passed away peacefully and attended by his daughters on Wednesday January 8th at Avow Hospice, Naples, Florida. He had resided most recently at Brookdale North Naples where his many friends remembered him for his kindness, his good nature and as a “gentleman of the old school.” Richard was born on April 27, 1928 in Hartford, CT to Richard M. and Jane I. Mackintosh Burgess. He graduated from Nott Terrace High School in Schenectady, NY, and received his BS degree in Civil Engineering from Rensselaer Polytechnic Institute (RPI) in June 1949. At RPI, he was a member of Phi Mu Delta Fraternity, and as an alumnus he served on the RPI School of Engineering Advisory Board, the Rensselaer Council and was a member of the Patroons of Renssalaer. He oversaw the Jane I. Burgess Memorial Scholarship fund established at RPI by his father for students pursuing a degree in civil engineering. On December 17, 1949 he married Marjorie Litz, who predeceased him on December 27, 2013. Richard died on Marjorie’s birthday. He was also predeceased by his older sister Jean Nold in 2009 and his second wife Grace Thomas, who passed away on September 30, 2018. Following his graduation from RPI, Richard joined his father in their family owned business C.J. Burgess Co., Inc., which specialized in commercial and industrial work in the Mohawk Valley, and which he later managed as president. Among the many buildings he designed and constructed were the Beech Nut warehouse on Erie Blvd. (now Richardson Brands), the addition to the Canajoharie Library and Art Gallery, and several NBT Bank locations. He also built a swimming pool at The Canajoharie Country Club so his four daughters and the community would have a place to swim in the summers. Richard was a past President of the Eastern Contractors Association, Building Industry Employers Association, and General Contractors of America, New York Chapter. He served on the Executive Financial Committee of the Boy Scouts of America, and the St. Mary’s Hospital Foundation Board. He loved “figuring things out,” paying close attention to numbers and details. His daughters fondly remember their annual conventions in the Catskills and at Whiteface Mountain in Lake Placid, NY. Known for his devotion to his family and his community, Richard was also an enthusiastic supporter of and contributor to RPI and Skidmore (his wife Marjorie’s alma mater). He resided in the same house in his beloved Ames for over 60 years, and served as its youngest mayor. Among his major contributions to the village as mayor were installing streetlights and instituting waste collection services. Richard was a member of the Ames Methodist Church. Richard and his wife Marjorie spent winters in Marco Island, Florida where they enthusiastically played tennis into their 8th decade. His interests were many and varied, ranging from landscaping and gardening in Ames to traveling with his four daughters and later enjoying cruises with Marjorie. He was a student of history, and a strong believer in tradition. Among his many books were “George Washington’s Rules of Civility” and a copy of The Declaration of Independence. He was also an avid reader of American narrative poets such as Longfellow and Robert Service, whose work “The Cremation of Sam McGee” he often read aloud at annual family reunions. These gatherings, organized, executed and presided over by Marjorie, in Ames, Lake Tahoe, Killington, Cooperstown, the Biltmore in Miami’s Coconut Grove and many more, were always a high point in his year, where he could catch up with his daughters, his grandchildren and his great grandchildren. Richard is survived by his four daughters: Christine Gordon, Kim Kluxen Meredith, Jill Wiener, and Vanessa Burgess; by eight granddaughters: Megan, Rachael, Zoe, Samantha, Ashley, Victoria, Jill and Marjorie; one grandson, Richard; eight great grandchildren: Oliver, Frances, Mick, Charlotte, Max, Will, Emily and Mason; sons-in-laws: Stephen Gordon, Tom Meredith, Richard Wiener, and Burt Kozloff; his sister Carol Chenette, and a nephew, Robert Litz who resides in Germany. A memorial service will be held on May 2nd. With the time being announced at a later date. Contributions may be made in memory of Richard James Burgess to Avow Hospice House, 1095 Whippoorwill Lane, Naples, FL 34105.
To plant a tree in memory of Richard Burgess, please visit Tribute Store
Services for Richard Burgess
There are no events scheduled. You can still show your support by planting a tree in memory of Richard Burgess.
Visit the Tribute Store

Share Your Memory of
Richard
Upload Your Memory View All Memories
Be the first to upload a memory!
Share A Memory
Plant a Tree