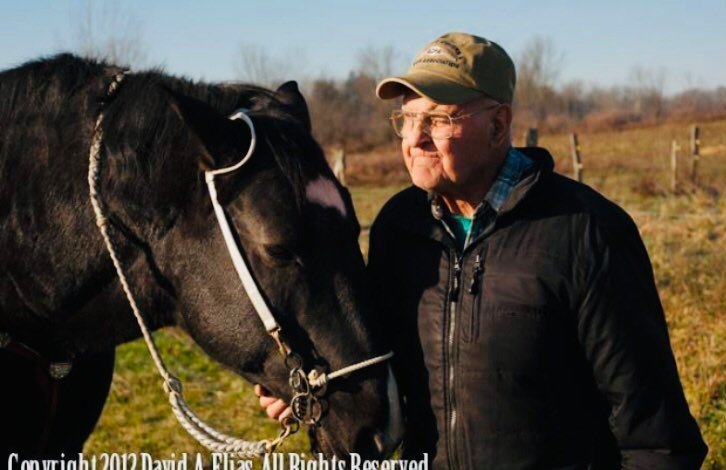 Mr. Anthony James Davi, 93, of Carlisle Road, Canajoharie, New York passed away at Cobleskill Regional Hospital from a broken heart after the loss of his wife of almost 70 years. Born on December 4, 1927 in the Town of Root, the son of Salvatore James Davi and Elizabeth Rappa Davi. He graduated from the Town of Root School, and spent his lifetime in the area. Mr. Davi worked for CJ Burgess & Son Construction for several years helping construct the Beech-Nut Warehouses. He was also a bus driver for the Canajoharie School district and worked the home farm, growing crops, hay and heifers. Later he became an independent contractor for the United States Postal Service. He was the Town of Root Highway Superintendent until his retirement. He loved and cared for his horses and bred and raised three generations on the farm. Many of which have gone on to win many championships. His first love was flying, as a pilot he enjoyed putting on air shows. He was known for his aerial acrobatic shows that he did for many years. On January 27, 1951 he married Bernice Ileen Tallmadge, who passed away on January 1, 2021. He was also predeceased by all his siblings, a baby sister, while the family still lived in Italy, as well as John, Ann, Nancy, Mary, Katie, Vito, Salvatore and Joe. Mr. Davi is survived by his son, Michael (Julie) Davi; daughters, Bettina (Donald) Krieger, Samantha Davi Eyster(Bill); grandchildren Tony (Adoni) Davi, Michael (Lisa) Davi, Jr., Amber (Brian) Dailey, Marcia (Craig) Shults, Christian (Courtney) Eyster; great-grandchildren; Brooke Dailey and Tiffany Shults. At this time services will be private and held for the family. A public graveside will be announce in the spring, when Mr. and Mrs. Davi can be laid to rest at St. Peter and Paul's Catholic Cemetery. The family asks anyone that wishes to to please consider donations to either the Rural Grove Fire Dept., c/o Garry Kamp, PO Box 219, Sprakers, NY 12166 or To the Canajoharie Vol. Fire Dept. Po Box 28, Canajoharie, NY 13317.
To send flowers to the family or plant a tree in memory of Anthony Davi, please visit Tribute Store
Tuesday
26
January

Share Your Memory of
Anthony
Upload Your Memory View All Memories
Be the first to upload a memory!
Share A Memory
Send Flowers
Plant a Tree