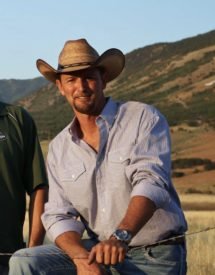 Ross was born July 16, 1973 in Gloversville, NY. He came into the world with a wrench in his hand, and it was impossible to keep him out of the toolbox. As a boy, you could often find him under his tricycle, fixing this or that – generally banging on the thing. He later graduated from Johnstown High School in Johnstown, NY. Ross married Kelli Nowers, and went on to become a skilled mechanic, automotive professor, shop owner, accomplished hunter, and volunteer firefighter.

Though his fearless attitude took his success to great heights, his greatest pride came from being a father. All three of his kids worked alongside him in the garage, starting in infancy as he did, with a tool gripped in their baby fists. He took great pleasure in tossing his children high in the air, but especially when they showed no fear. Seeing that they were just as brave as he, Ross would snarl his nose and laugh. As the kids grew, so did their projects – he enjoyed crafting makeshift boats and dune buggies in the garage with the boys. He packed the kids with him for week-long elk hunts, or quick day trips to find antler sheds. The mountains were part of him.

Ross had a sparkling wit and a need to tease. As his siblings can attest, Ross’s puppy licks were more common than his hugs. You were as likely to have him tell you he loved you as you were to have him blow up your nose – but we all knew they were one-in-the-same with him. Ross was never as happy as when he was wrestling with his boys, or having Remmi tell him what’s what while she stuck bows in his hair. He was so proud of his kids. He talked endlessly of their accomplishments, how they were more than he could have ever hoped. They were truly his pride and joy.

We will all miss his campfire stories, his laugh, his curious mind, his passion and invention. We will never forget, because how could we? Such a life is not often lived.

If you wish to donate to the Hayner family, you may do so through the following institutions:

Share Your Memory of
Ross
Upload Your Memory View All Memories
Be the first to upload a memory!
Share A Memory
Plant a Tree